History of the Pudelpointer

As might be gathered from the name, its origins are from the English Pointer and the Standard Poodle, the German rather than the French breed known in its native land as the Pudel, a working dog that loves the water and has very strong retrieving instincts.

The beginnings of the breed date back to about 1881 when a German Hunting Pudel bitch was bred to an English Pointer male. From that breeding the first line of dogs was started, hoping they would have the drive of the English Pointer along with the affection and trainability of the Pudel.

Some back crosses to Pointers were necessary because of the depletion of the breeding stock during the two world wars.

The first dog to arrive in North America was imported in 1956 by Sigbot Winterhelt and H.D. Hume.  Since then many others have been brought in, and a careful breeding program has been followed to maintain the quality of the breed.

The Pudelpointer is a medium size dog with a height range of 22 to 25 inches at the shoulder and weighing from 45 to 70 pounds.

They are most commonly brown in color, although they can range from liver to black. White markings are permitted on the chest and feet. The ideal coat is harsh, wiry and dense but many variations are possible. Some dogs are smooth coated while others have a long wooly coat, but all Pudelpointers should have pronounced eyebrows and a whiskered muzzle.

The tail is docked at two-thirds of it's original length. Pudelpointers are clean dogs that shed very little and require a small amount of maintenance. 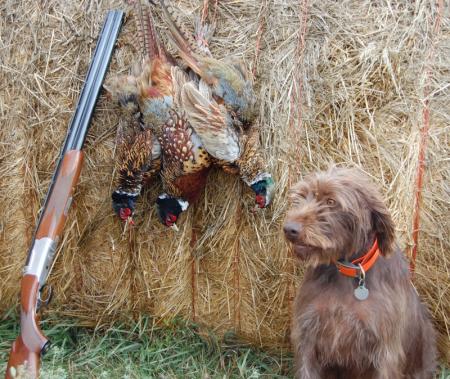